Before an issue is generated, we perform some extra checks. This is so because previously we created issues when we should not have, so we added these checks. Some of these checks are obvious, for example we don't create an issue if one already exists, or if we've never received any data for the system (perhaps because it hasn't been set up properly yet). Some other checks are not so obvious. For example, if a system status is not producing, but new readings are being loaded that indicate that the system is coming back online, then we hold off with issue creation. Also, if readings indicate that data is being bulk-imported (we know this if many readouts are being loaded with the same readout timestamp), then we wait for this to finish before creating an issue. See Review the event log section below for an explanation of how these extra checks are performed.

Another aspect of issue creation is determining how long since the problem started. There are two approaches:

The last "significant readout" is identified based on the system status. If the system is in COM ERR then we haven't been receiving readouts at all, so the last significant readout is the last non-zero readout that we received. If that was 4 hours ago then the issue has been around for 4 hours. If the system is in NOT PRODUCING state then we consider the newest readout, and walk backwards in time until we find a readout that is significantly different. Here we use the same algorithm used in site status determination, so if an explicit Minimum Production Threshold is set for the system, we use that, otherwise we calculate using the system DC size (or AC if DC is unavailable), or fall back on a fixed threshold of 5 kWh. So basically if the latest reading is 12345 kWh, and a fixed threshold of 5 kWh is set, then we backtrack until we find a reading less than 12340 kWh, and consider the outage to have started then.

Each of the two approaches to determine how long since the problem started has its merits and drawbacks. If we simply use the time then the system status changed, then we cannot run extra checks for example to see if the system is showing signs of life. However this way notifications are more consistent with system status, so clients don't question why an issue wasn't created even though the system has been in not producing state for a while. If we use the second "smart" method and determine when the last significant readout was acquired, then we can be more accurate in only creating issues if the system really requires attention, lowering false-flag notifications. For example, this way if we set up a new system and it takes Mana several days to acquire all historical readings for the system, then initially the system status will start to show that the system is Not Producing, but as long as we enable the extra checks, no issue will be created or notification sent out. Similarly, if a system stops communicating and goes into COM ERR, but then comes back online but initally reports very small readings, then the extra checks can help us to avoid unnecessarily creating a NOT PRODUCING issue.

For some clients (currently NPC) we skip all extra checks and just consider how much time has elapsed since the system status deteriorated. For others we use the second "smart" approach

A site is down, yet no issue was created. Why?

If you suspect that an issue should have been created but wasn't, use the notification generation tool in simulation mode to see why the system isn't generating a notification: 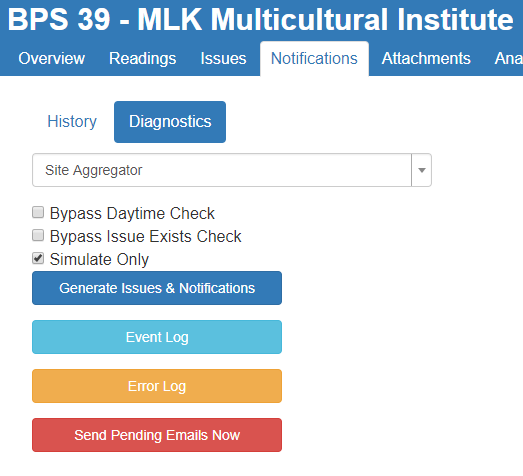 If it is nighttime at the site, the system will not generate an issue. Enable the Bypass Daytime Check option if you want to see if there is any other reason why the website hasn't generated an issue for the system.

If you do not wish to actually create an issue, make sure the Simulate Only option is checked.

The results of the issue generation are displayed with an explanation as to why an issue was or wasn't created:

Use the Event Log button to review issue generation events related to the system selected: 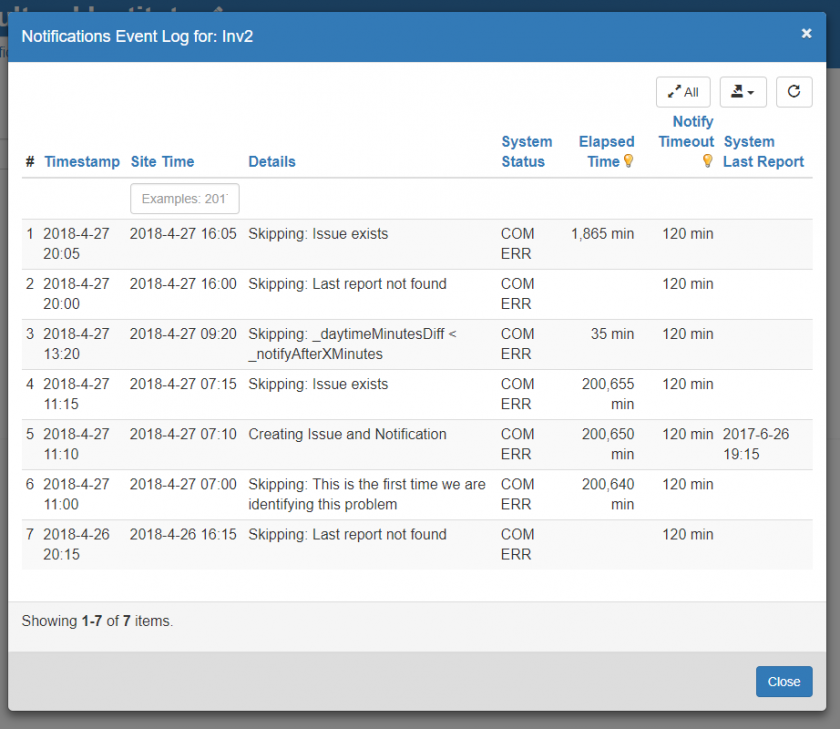 Note that the website does not record events if notifications are off for the given system. The following types of events are recorded:

Use the Error Log button to see if the system has encountered any errors during issue generation for the selected system.

"Cannot obtain lock on..." type errors may occur from time to time and are usually not a cause for concern.

The website automatically checks every few minutes if there are any pending emails awaiting delivery. However, you can force the site to check immediately for any such messages and to then send them using the Send Pending Emails button: