The purpose of this document is to demonstrate the tools available in order to understand why a system has a certain status. We will use an actual issue as an example, described in MANA-3890 Improper (?) "Not producing" status regardless there's production figures - Maui Cost Hotel (Restaurant)

A good tool to understand why a system has a certain status is the System Status History page, which can be opened from the Site Details page:

For a subsystem, only the first three columns are relevant:

For an aggregator system, you can also see the number of subsystems producing, not producing, and having communications errors. For this given system, we can see that it last entered NOT PRODUCING at 8:03 p.m. local time, because the energy generated that day (as far as we know at that time) was 0 kWh. So the algorithm determined site status as described in case #7.1 of the  System Statuses and Icons chapter in the Mana User's Manual appendix.:

We can then check when we received data for this day on the Readings → Local Readings page: 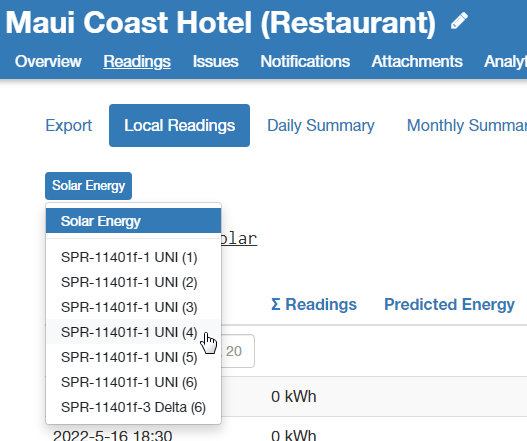 We can see that we started receiving data for 5/16 at 8 p.m. that day site time. Because it takes around 60 minutes to aggregate values currently:

A proper solution with sites like this, where data is only reported sporadically, is to increase the site not producing notifications to 1440 minutes: 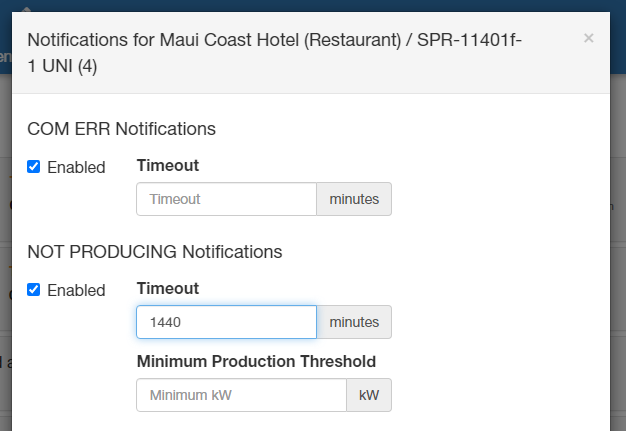 This way the site status determination will change. Particularly the following will be checked:

6. When the timeout is at least 1440 minutes (1 day)
and the energy generated yesterday is more than what the site is expected to produce in a day*5 then:
1. NORMAL/OVER-/UNDER-PRODUCING (see step #9 below for criteria)
2. or the Site last reported before the solar day end yesterday (minus a dawn/dusk offset*7), and yesterday the site was fine, then don't change the site status (until the morning at least)

So in effect we will only go to NOT PRODUCING if the site hasn't reported readouts for yesterday by the morning, or if those readouts indicated very low energy production yesterday.

See the section Rules for systems where the NOT PRODUCING Notifications Timeout is at least 1 day in the System Statuses and Icons chapter Mana User's Manual Appendix for more information.